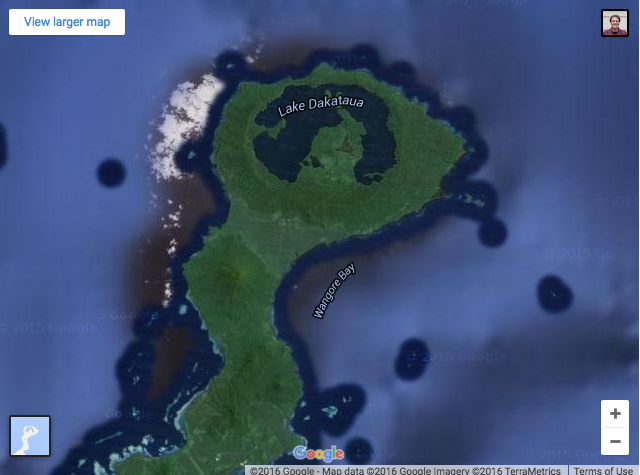 Today I was gathering locality data for some clownfish samples sent to me by generous colleagues (thanks Philippe and Elizabeth!), and I came across some satellite photographs of the area I visited in Papua New Guinea near Kimbe. A large bay is created in the center of New Britain by a very long, narrow piece of land running perpendicular to the coast, called the Willaumez Peninsula. At the end of that peninsula lies Lake Dakataua, a substantial body of freshwater likely created when rain water filled an empty volcano caldera. When I first learned about the lake, I was curious what sort of critters lived there, but didn’t have the time or internet to look into it. Well, when I saw the lake on a map today, I had to do a little Google research.

I was not too surprised to find that there had been very little work done on the lake (I have been told the Willaumez peninsula is not the safest place for outsiders), aside from some limnological surveys done in the 1970s. However, I was more than a little shocked to learn that there are NO fish present in the lake. None. Zero. Zilch.

I could easily be convinced to expect the lake to be species-poor because of it’s young age, but given that the “Shallow areas support dense beds of mixed aquatic plants”, and are home to sponges, plankton, six species of molluscs, numerous aquatic insects, crocodiles, and “abundant” waterbirds, I find it hard to imagine that not a single fish lives in a lake the size of Pitcairn Island! I would be very interested in investigating this someday.

Note: Perhaps the lack of fish is due to the presence of a sea monster…